The city of Jamshedpur is managed by the following bodies: 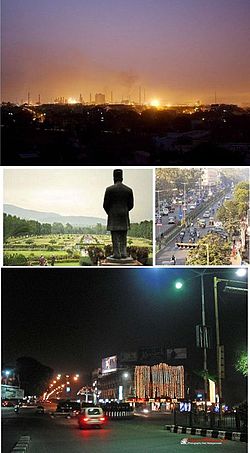 The Jamshedpur Notified Area Committee (JNAC) was formed by the Bihar Government in 1924. In the beginning, the President and Vice President of the committee were selected from TISCO. In 1998, JNAC was dissolved and the subordinate officer of DC (District Commissioner), East Singhbhum, Jamshedpur was given the responsibility of managing the committee. In 2006, the Urban Development Section of the Ranchi Jharkhand Government approved the posting of Special Officer in Jamshedpur NAC.
JNAC comprises of a Tata lease area and a non-Tata lease area. The leased area which is 41 km² is managed by JUSCO while the rest is managed by JNAC itself.The main functions of JNAC include providing proper sanitation facilities in the city, ensuring adequate supply of water in the city, constructing roads, drains etc. as and when required, developing and managing city amenities such as gardens, parks, markets, bus stands etc. administering the pollution control schemes in the city.

The Jamshedpur Utilities and Services Company (JUSCO) came into being in 2004. Carved out of Tata Steel, the company was established with the aim of providing excellent infrastructure and utility services to the people of Jamshedpur. The company has carried out its functions in the areas of civil and electrical maintenance, water management, solid waste management, power distribution and engineering procurement and construction with utmost competence and commitment and the various national awards won by it for its services prove that.JUSCO functions under the chairmanship of Mr Sandipan Chakravortty. Mr. Ashish Mathur is the Managing Director of the company.

Across the Subarnarekha River, lies Mango, a suburb of the city of Jamshedpur. This small city is considered a notified area and managed by the Mango Notified Area Committee (MNAC). MNAC looks after the residential regions of Mango and Pardih. The total area is about 18 km2 .The state run electricity board, JSEB provides electricity to the city. Recently, MNAC has entered into an agreement with JUSCO to provide tap water services to the area.This residential area is currently witnessing a real estate boom. Along with numerous houses, the area includes two hospitals, a medical college associated and two private engineering colleges.

Jugsalai is a township adjacent to the Tatanagar Railway Station in Jamshedpur. The civic administration of this township is handled by the Jugsalai Municipality.

AMC looks after civic and other allied services in the industrial hub in Seraikela-Kharsawan district, has roped in utility company JUSCO to take charge of cleanliness in its command areas. The AMC command areas comprise Adityapur and parts of Gamharia, which have a combined population of 3 lakh. The total area managed by AMC is about 49 km2 of Adityapur region including the residential as well the industrial belt.

This panchayat takes care of the civic adminstartion of the Gamharia village.

Jamshedpur Urban Agglomeration or JUA is an unified municipal administrative body for Jamshedpur which the government is contemplating to develop. It is expected to undertake the administration of areas currently under the Jamshedpur Notified Area, Adityapur Municipal council, Mango Notified Area, Jugsalai Municipality and the towns of Chhota Govindpur, Sarjamdah, Ghorabanda, Gadra, Luabasa, Parsudih, Hurlung, Dhanchatani, Chhota Gamharia, Haludbani, Kitadih, Nandup and Bagbera, which are a part of the Jamshedpur Block, East Singhbhum and Gamharia Block, Seraikela-Kharsawan. The JUA is proposed to cover an area of 150 km2

The responsibility of the development of the city of Jamshedpur lies with the Adityapur Industrial Area Development Authority (AIADA). AIADA is responsible for acquisition of land, development of infrastructure facilities like road, drainage, park, water supply, public utilities, etc. in Jamshedpur.

To deal with disputes between individuals or between private businesses or institutions, Jamshed pur houses a civil court and a consumer court.

Along with the courts, the Jharkhand State Legal Services Authority (JHALSA) plays a vital role in solving the disputes in the city. The special center that leads to conciliation between fighting parties in Jamshedpur is known as Mediation Conciliation Centre, Jamshedpur.

The criminals are kept in two jails in Jamshedpur Ghagidih Central Jail, Jamshedpur and
Sakchi Jail. Both the jails include various programs that help the inmates to get prepared for a normal social life.