Jamshedpur, the first industrial city of India is located in the southern end of the state of Jharkhand. It is a part of the Chhota Nagpur plateau and is bordered by the states of Orissa and West Bengal. This well-planned city is spread over 150 km square and occupies about 2.03% of the total area of Jharkhand. The average elevation of the city is 135 metres and the range is from 129m to 151m. The location of Jamshedpur is 22.8° North Latitude and 86.45° East Longitude. 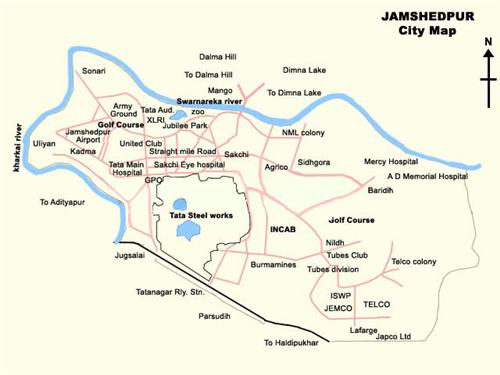 Jamshedpur is a hilly area surrounded by deciduous type of dense forests. The Dalma Hills surrounds the city, followed by Ukam Hill and the Jadugoda-musabani hill range. Sedimentary, metamorphic and igneous rocks belonging to the Dharwarian period are mainly found in the city. The region is rich in minerals. Minerals such as copper, iron ore, gold kynite and uranium are found in abundant quantities in Jamshedpur.Vegetation is found in abundance in Jamshedpur. Almost 33% of the total land area of the city is covered by forest. Different types of trees are found in these forests, the main types being Palash, Bamboo, Gamhar, Sal and Mahua.

With more than a million population, the Jamshedpur Urban Agglomeration is the only ‘Million plus Urban agglomeration’ that runs without a municipality. While males constitute 52.1% of the population, females and tribal constitute around 47.9% and 28%, respectively. The population is multi-ethnic as people from all over the country migrate here to work in the industries of the city. In the urban areas, the common languages used for communication are Bengali, Hindi and English. Tribal languages such as Santali and Ho are spoken in the outskirts.

Jamshedpur is located at the convergence of Kharkai and Subarnarekha Rivers. The main river of Jamshedpur is Subarnarekha, which flows from west to south-eastern part of the region. The total length of Subarnarekha is estimated to be about 450 kilometers. 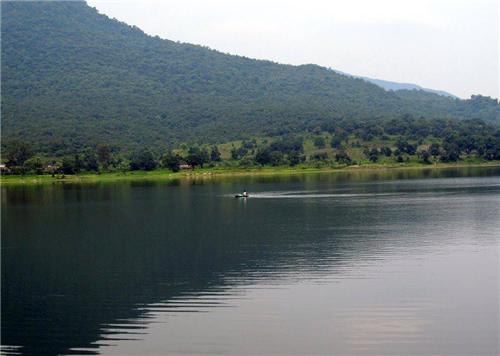 Several small rivers join this river, thus providing abundant supply of drinking water to the city. One such important river is ‘Kharkai’, which flows from the south and joins the Subarnarekha river here. Many lakes are also found at the fringes of the city. Two reservoirs that store the drinking water of the city are the Dimna lake located amidst Dalma range and the Sitarampur reservoir situated beside Kharkai river.

The climate of Jamshedpur is tropical wet and dry. It has a temperate climate. The city witnesses summer climate from mid-March and becomes extremely hot in May and June. During summers, people suffer from extreme heat with the temperature varying from 35 °C to 49 °C (95 to 120 °F). The city exhibits contrast in climate when during the winter season the minimum temperature reaches to an alarming degree of 1 °C (34 °F). As the climate of Jamshedpur is marked by south-west monsoon, it rains heavily in the region rainfall from July to September. The area receives about 1,200 mm (47 in) of rainfall annually. The climate of Jamshedpur is best during October to April and thus this is the best time to visit the place.