Jamshedpur is the largest city in the state of Jharkhand. Famed as the first planned industrial city of India, this wondrous city was discovered by Jamshedji Nusserwanji Tata (J.R.D. Tata), an industrialist par excellence. A major industrial centre of East India, the city of Jamshedpur owes much of it development due to the presence of well-established firms belonging to TATA Group like Tata Steel, Tata Power, Tata Motors and many others. 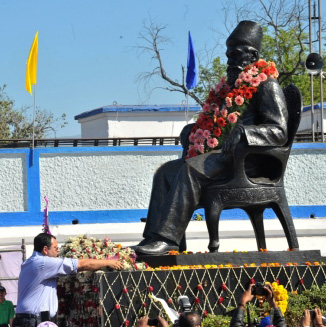 Others like Telcon, Lafarge Cement, Praxair, BOC Gases, have also added to the legacy of the city. A major appealing factor of the city of Jamshedpur is the existence of Adityapur which with 1,200 small and medium scale industries is one of the major industrial zones in India.

Origin of the Name

The city was originally known as ‘Sakchi’. However, to honor its founder Jamshedji Nusserwanji Tata, in 1919, Lord Chelmsford renamed ‘Sakchi’ as Jamshedpur. It is also known as Steel City, TataNagar or simply Tata. Eventually, the city earned several nicknames including ‘Steel City’, ‘Tatanagar’ or simply ‘Tata’ to signify the presence of so many Tata companies, and the development happening in the city due to them.

The city of Jamshedpur was born out of the visions of the famous industrialist, J.R.D. Tata. During one of his business visits to Manchester, he got influenced by the thoughts of Thomas Carlyle who said “"the nation which gains control of iron soon acquires the control of gold". He thereby envisioned India to have a strong foothold in steel production as this could boom the economy largely. In his quest to build the best steel plant, at the turn of the twentieth century, he got in touch with geologist Charles Page Perin to locate the most suitable site to build India's first steel plant. In April 1904, a three member team of Dorabji Tata, Shapurji Saklatvala and C. M. Weld, took up the challenge and went on the arduous journey to locate a site that was rich in iron, coal, limestone and water. Their search ended as they reached called Sakchi, a village located at the densely forested stretches of the Chota Nagpur plateau. Located near the convergence of the Subarnarekha and Kharkai rivers, it was the ideal choice for the plant. The construction of the plant began in 1908. When the plant rolled its first steel ingot on 16 February 1912, the industrial India added a new milestone to its history.

J.R.D. Tata was an empathetic businessman and believed in growing collaboratively. He decided to build a well-planned city for the workers in the plant as well. He stressed on providing all comforts a city could provide. Messrs Julin Kennedy Sahlin from Pittsburgh prepared the first layout of the town of Jamshedpur and his visions resulted in the formation of the well-planned city of Jamshedpur, which included numerous conveniences and public leisure places such as the Jubilee Park, lawns, gardens etc.

The old railways station of Jamshedpur known as Kalimati was also eventually renamed Tatanagar Railway Station, reinforcing the dominance of ‘Tata’ in the state. Interestingly, Jamshedpur is only one million plus city in India which remains outsides the control of a municipal corporation. Though the state government has made recurring attempts to end the Tatas' administration of Jamshedpur and bring the city under a municipality in 1980s as well as in 2005, due to the increased protests by the local population, it has failed to do so till now. In 2004, the city was nominated as the first South Asian city for the pilot phase of the UN Global Compact Cities Programme. Health care, educational training, housing, water and electricity and other development programmes have reached the last-mile person, thanks to the plans and proposals well implemented by Tata Steel in collaboration with State Government of Jharkhand.The city owes much of its development to the Tata industries and is growing at a fast-pace with the growth of the Tata companies.

Today Jamshedpur is one of the fastest growing cities in Jharkhand with its commercial and industrial activity. The region is economically supporting the state with increased revenue generation. It is one of the most visited place in India and finds description in the evolution of industrial cities of the world.